A huge Thank you and Special tribute to my Grandpa! 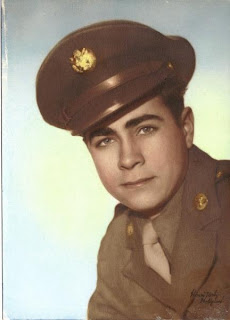 Thank you too the Men and women who have fought, are fighting and will fight for our country! You are truly selfless!! With out our great soldiers we would not have freedom!!!
Special Tribute to my Grandpa
Frank B. Morgan SR. He was Born on Dec 10, 1928. My Grandpa moved to hollywood when he was a teenager to become a actor with his good friend Stuart Whitman. For some reason my Grandpa had a change of heart and decided to join the Air force instead. He Served in WORLD WAR II, KOREAN WAR, AND,VIETNAM. He became a Master Sergeant in the airforce. I dont know the extent of what he did in the airforce but I do know he worked for the DIA. after many years serving he retired. Im not sure when. He was stationed in Russia, Germany, japan and many other countries.
He was an incredible man. He loved to collect books, tapes, paintings and records. He knew i think 4 different languages. I can remember everytime we would go to see him he would have rootbeer. He also had this little russian nesting doll. Im sure he got in Russia. But we would always fight who got to play with it. He loved old movies and classical music. He had to sell alot if his possessions when he had cancer about 10 years ago. Very valuable paintings and things. But he kept a good amount of them. He moved near us and we were able to have a good 5 years or more with him. I wish i would have spent more time learning about what he did in the military but i was a teenager at the time and took people near me for granted. He passed away April 16, 2006. He is burried at PRESIDIO OF SAN FRANCISCO. I got a few of his paintings. They are from Japan. I also got alot of his books. mostly books about japan, china, or Russia. Also alot of different language dictionaries. Pretty cool. anyways i just wanted to tell you a little about my grandpa.

your grandpa sounded like an amazing man, tiff! so thankful to him and to all soldiers who fought and who are fighting for our freedom. thanks for sharing. *hugs* steph

I am an affiliate with Scrapbook.com

I am affiliated with Scrapbook.com and Amazon.com . If you buy products from these companies by clicking my links, I get a small commission from these shops. This does not affect the price of the items your purchase. Thank you

I am an affiliate with Amazon.com

DEAL OF THE DAY SITE

Who is visiting from where!!

How many people visit my blog

All content including photographs, text, and designs belong to Tiffany morgan. original creations and designs are shared for inspiration and can not be used for publication,contests, or to sell. Thank you!